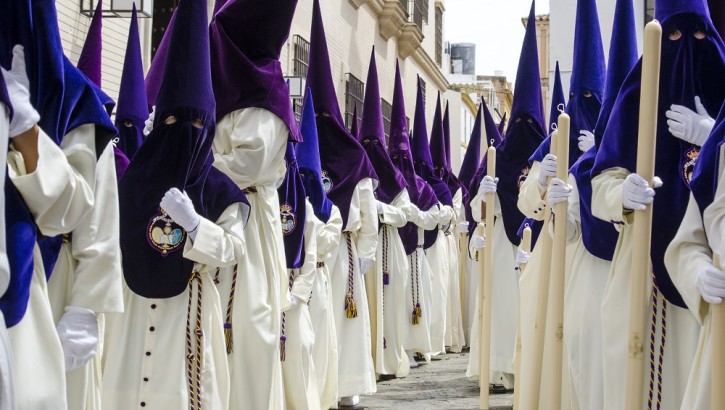 Holy Week, or Semana Santa, celebrations in Spain are a week-long spectacle of pageantry, art, religious fervour, solemnity and above all, raw emotion.

Processions wend their way from parish churches to cathedrals as brotherhoods known as cofradias mark Easter Week by bearing figures or imágenes of the Virgin Mary and Jesus, along with colourful tableaux of bible scenes known as misterios on pasos (floats) or tronos (thrones), borne on the shoulders of local devotees.

These processions are accompanied by Nazarenos (penitents) dressed in distinctive hooded outfits in their cofradia’s colours. The tall pointed hoods penitents wear are known as capirotes and are designed to allow penitents to repent for their sins whilst retaining their anonymity. They may also carry wooden crosses and lit candles, and many follow traditions such as walking the streets barefoot as they make promises or seek absolution.

Easter is regarded as the most important religious festivity throughout Spain, but each region has its own traditions and flavour for the occasion. In Castille and Leon it is a sombre and solemn event, as typified by the processions in Zamora and Valladolid, while the faithful in Andalucía present a more colourful and even glamorous series of parades. Although processions occur in towns and villages across the region, those in Málaga and Sevilla are the biggest, each attracting up to a million spectators.

The Holy Week celebrations in Málaga are among the most famous in Spain and as a result are televised nationally. Their popularity is down to the unique spirit and exuberance that the city’s people bring to the event. While religious fervour is the order of the day, the Malagueños, as Malaga natives are called, do not believe in the silence and meditation seen elsewhere in Spain. Here chatter and noise, happiness and the spontaneous singing of saetas (flamenco verses), as well as applause for the processions are main features of the event. 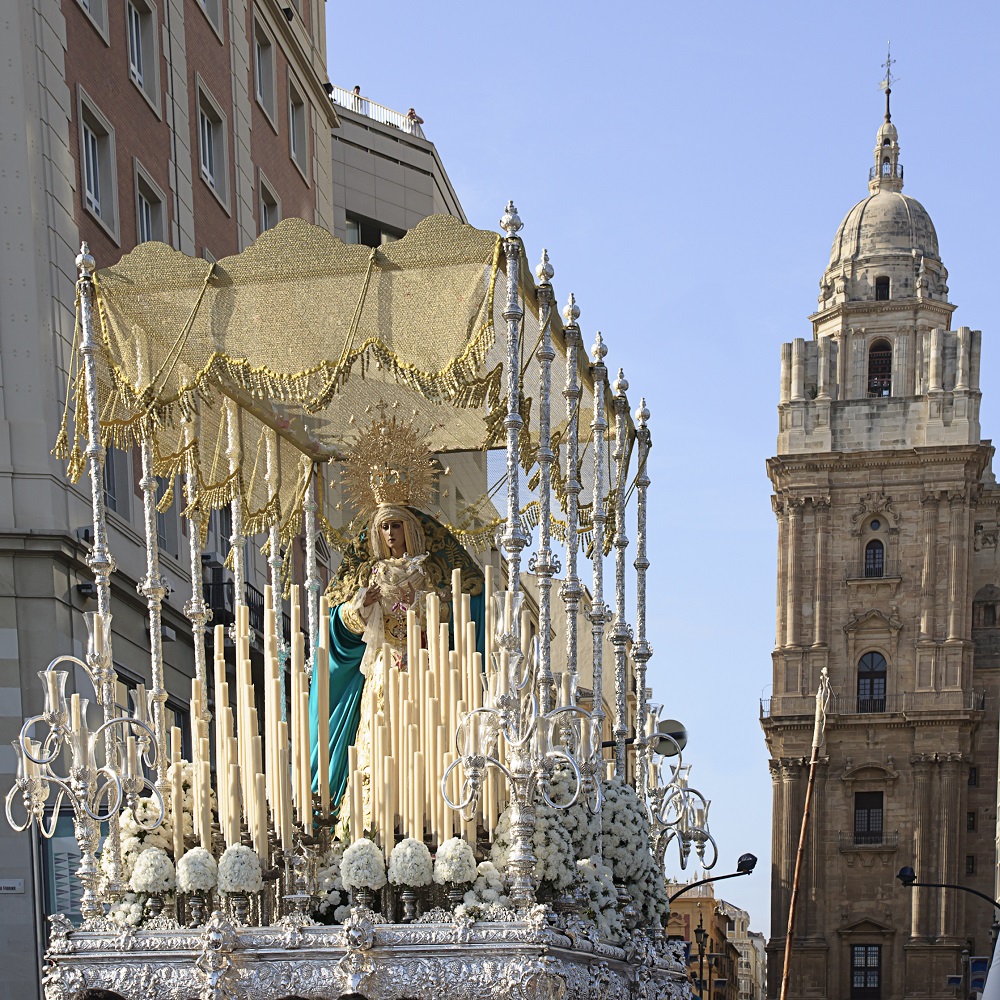 The artistry of the images and floats combines with the colourful spectacle of the robes of thousands of penitents, and the scent of flowers and incense permeates the streets..

Processions begin on Palm Sunday, with Semana Santa’s conclusion falling on Easter Sunday. Maundy Thursday and Good Friday see the most dramatic of the parades when the ornate tronos weighing up to 5,000 kilos make their way through the streets on the shoulders of hundreds of devotees.

A newer ‘tradition’ is the cameras zooming in on Málaga-born actor Antonio Banderas as he makes his annual pilgrimage to the city to take part in its Easter festivities. There he joins his cofradía to bear the throne for the Virgen de Lágrimas y Favores (Virgin of Tears and Favours) and enthusiastically takes part in the celebrations.

The Spanish Legion also plays an important part in Málaga’s Easter Week. Each year they cross the Mediterranean from their Ceuta base to participate, with their military music and marches providing a unique flavour to the event.

In Seville, the Easter processions are more serious, but they are also perhaps the most ornate and elaborate in all of Spain. Here the Easter floats are known as pasos and weigh over a tonne. They are held aloft by costaleros (in English: sack men, in reference to their unique and functional headdress). The costaleros are hidden within the framework of the pasos and appear to make them move by themselves.

Though Sevilla and Málaga are the ‘big ticket’ events, all major Andalusian cities have their own singular and special traditions. Below are ten of the most important Semana Santa Easter celebrations for anyone wishing to experience a true taste of Spanish Easter. 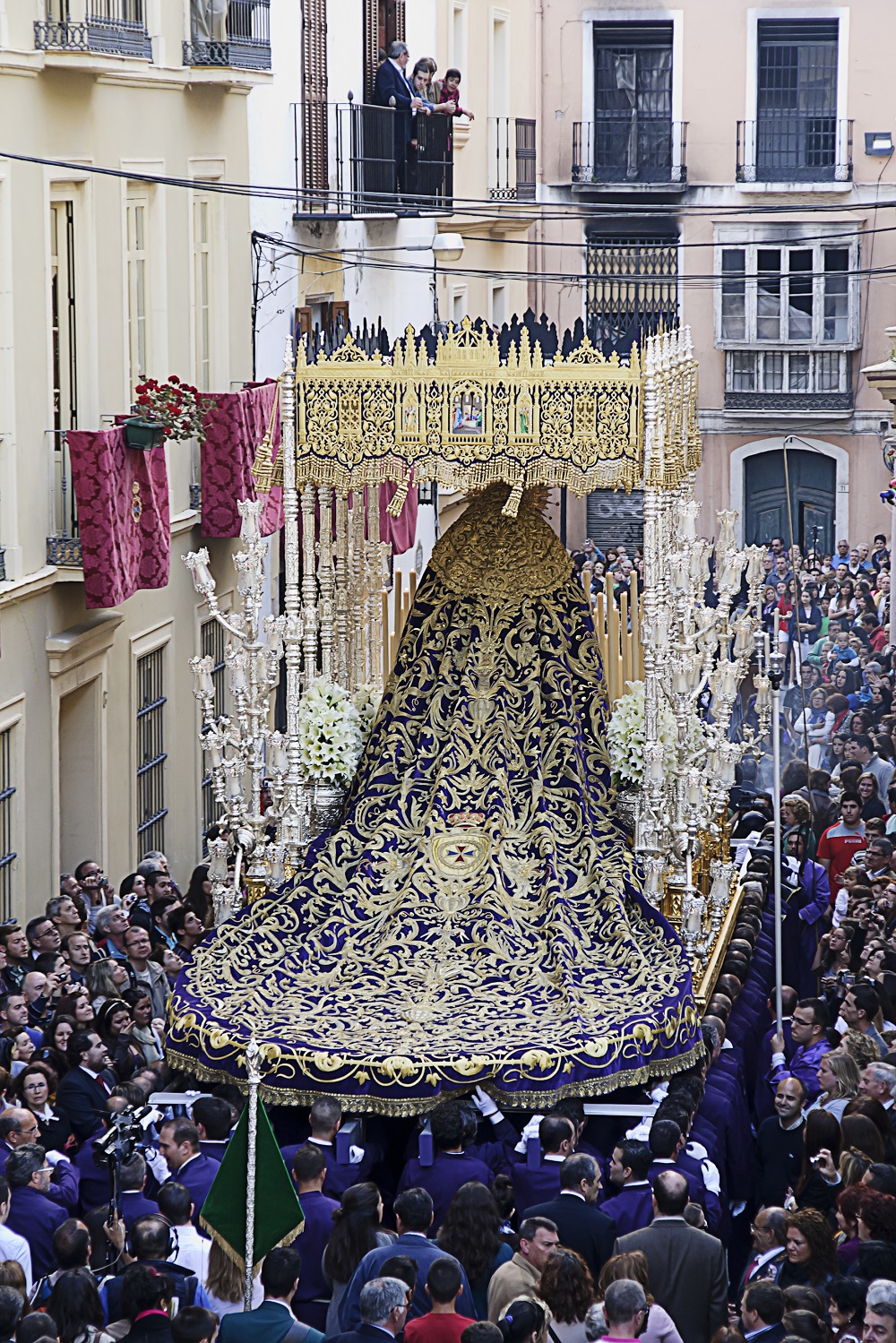 1. The Captive of Málaga

Perhaps the most revered image in Málaga province is that of Nuestro Padre Jesús Cautivo de Málaga (Our Lord Jesus, the Captive of Málaga). The work of sculptor José Gabriel Martín Simón, this white robed statue is presented on Easter Monday when a million people throng Málaga’s streets to view the procession and experience the raw emotion of devotion surrounding it. The billowing robe is said to give the statue the appearance of walking.

The Dawn of Seville (La Madrugada de Sevilla) is truly a special occasion in Andalusia’s capital city Easter line-up. Taking place overnight from Maundy Thursday to Good Friday, the faithful stay up to witness the processions of the Esperanza Macarena (Our Lady of Hope Macarena) and the Esperanza de Triana (Our Lady of Hope Triana). Another of the noteworthy processions is that of the ‘Jesus of the Great Power’, known as the Lord of Seville (Jesús del Gran  Poder).

On the morning of Maundy Thursday, the 3rd Legion Tercio Don Juan de Austria of the Spanish Legion lands at Málaga. After dusk the Christ of Mena procession starts, accompanied by the legion and its military anthems, making this one of the most popular processions in Spain with a television audience running into the millions.

A trip to Granada offers a completely different type of Easter experience. Both the penitents and observers here maintain complete silence, broken only by a sombre drum beat, as the image of the Silent Christ (Cristo del Silencio) wends its way around this most beautiful of Spanish cities. Following tradition, all lighting along the route—both public and private—is extinguished. The spectacle is illuminated solely by candlelight, which adds greatly to the atmosphere.

Back in Málaga, Granada has had its influence on Holy Wednesday too. This is a very special day in the capital of the Costa del Sol where El Rico, a Nazarene work by renowned sculptor José Navas Parejo from Granada, forms the centrepiece of the procession. The image ‘points’ blessings to spectators before ‘selecting’ a prisoner from the local jail with its articulated arm. This tradition dates back to the plague-struck year of 1759, when inmates bore a float to atone for their sins and called for God’s help in saving them. The epidemic ended soon after and since then, every year a prisoner is pardoned on Holy Wednesday.

On Palm Sunday in Cádiz it is children who are the focus of events, forming the main part of the ‘La Borriquita’ procession. Kids bearing olive branches and palm fronds accompany a float that symbolises Jesus’ entry into Nazareth. The focus on children gives the event a light-hearted and joyous feel.

The solemn image of Christ’s Last Supper is central to the Easter ceremonies in Huelva. Situated in the far west of Andalucia, the city is a little off the beaten track, but this procession is a must if you are in the area. The paso of the Last Supper (Sagrada Cena) leaves from what is regarded as the most sacred and religious area of the city, El Polvorín, with the Brotherhood of the Sagrada Cena having the honour of bearing the float that contains a very intricate and life-like scene. Thousands pack the streets on Palm Sunday to view the parade, which is regarded as one of the holiest and most important in Huelva.

The fervour and mournful musicality of the Gypsies of Granada is a highlight of The Christ of the Gypsies (Cristo de los Gitanos) processions. As the effigy proceeds from the parish church of the Romani quarter of Sacromonte—perched on a hillside overlooking Granada—fires are lit along the way and residents break into flamenco song. It’s one of the more striking processions in Granada, wandering through the picturesque streets with views to the imposing Alhambra and down across historic Granada. It is a beautiful event that is not only unique to Granada, but shows this majestic city in its best light, while offering an insight into the heart of the Gypsy community.

Although not as large as the cities mentioned above, the town of Antequera has a rich religious tradition and is blessed with no fewer than 33 ecclesiastical buildings, including monasteries, churches and chapels. These help create an ambience perfect for Easter traditions. The pasos and tronos viewed here are a special sight: Antequera is home to a significant goldsmith community, whose members have spent many hours ensuring the town’s floats and statues are truly spectacular. Such is their fame that the goldsmiths of Antequera create pasos and tronos for brotherhoods all across Andalusia—but naturally none surpass the beauty of those to be found in their hometown.

Last on our list of most important Andalusian Easter events is the procession of The Virgin of Zamarrilla in Málaga on Maundy Thursday. This is one of the most widely-followed statuettes in the city, largely due to the legend that surrounds it. The story goes that a bandit on the run from the Guardia Civil (Spanish Civil Guard) fled into the church and hid beneath the skirts of the figure. The police couldn’t find his hiding place and when they left, to show his gratitude, the fugitive pinned a white flower to the Virgin’s chest with a dagger—turning it crimson where the knife made contact.

The above are just some of the major processions held during Semana Santa throughout Andalusia, and each is special in its own way. If you cannot make it to one of these attractions, there are hundreds more processions in towns and villages across the region. Every one offers a glimpse into the religious fervour and traditions of Spain. It is well worth taking the time to view one of these festivities and immerse yourself in the culture of Andalusia. You’ll be rewarded with rich visual spectacles and an ambience unlike anywhere else in Europe.

2019 Easter week celebrations run from Sunday, April 14th (Palm Sunday) through Easter Sunday (April 21st). Many streets in Málaga, Seville, Granada and other cities and towns will be closed to traffic or have restricted access throughout the week.

What are the itineraries of the Semana Santa Easter celebrations in Andalucía?

Below are links to itineraries of some of the major cities’ Easter celebrations. Bear in mind processions may be cancelled should there be heavy rain or inclement weather.