First Occupancy License: What is and what is it for? 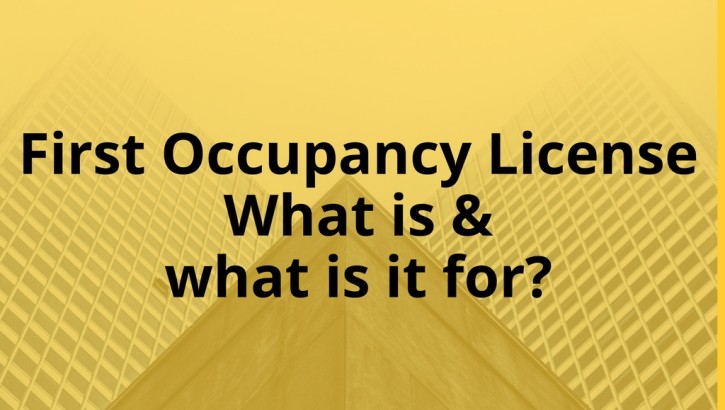 What is a First Occupancy License or Licencia de Primera Ocupación?

The First Occupancy License  (also called LPO and Licencia de Primera Ocupación in spanish) is a local license in Spain which aims to control the compliance of a previously-granted construction license provided by the same institution carrying out the construction (construction permit).

What does the First Occupancy License affect?

The LPO affects the first use or occupation of a building, house or facilities in general. In Andalusia, a First Occupancy License must be provided in order to legally hire services such as water, gas, electricity or other utilities for the first time. Therefore, the LPO is an essential document that must be provided at the notary at the moment of the purchase deed because it will be necessary at for later procedures. In the case of purchasing the house with a mortgage loan, the bank will ask for this document to study the concession of the mortgage.

Is the LPO the same thing as an opening license?

The First Occupancy License and an opening license are two different things: The opening or installation and activity license allows for the exercise of an activity in a store or retail space, whilst the LPO verifies that the use is properly aligned with the urban plan.

What is the purpose of the LPO?

The purpose of the First Occupancy License is to compare the finished construction project with the project proposed in the building permit granted at that time.

Who requests the LPO?

What is needed to request the LPO?

In order to request the LPO, the promoter must present the construction completion certificate signed by the corresponding architect and building engineer, approved by their respective professional bodies.

What does the concession of a LPO depend on?

The granting of a First Occupancy License in Spain is determined not only by how accurately the final construction matches the conditions detailed in the initial building permit, but also it will be affected by the terms of  municipal ordinances, included those of fire protection and prevention. If any defect is observed by the correspondent municipal services, the license requestor will be asked to correct the defect before being granted an LPO.

Can the LPO be denied?

If the completed building construction corresponds to what was detailed in the  initially granted building council, the local city council cannot refuse the first occupancy license. The LPO is the technical expression of the completed project verification relating to building and work permits.

The LPO is a regulated non-discretionary matter and can only be denied for one of the following reasons:

– Because the construction work does not correspond with the technical project which was presented and under which the first building permit was granted.

– Because the construction work does not contain the necessary conditions required from a general interest point of view. However, the negotiation of the LPO cannot be based on the building permit not being adjusted to the rules.

– Obviously the LPO can also be denied if the construction work has not been properly completed yet.

REMEMBER: In Spain, you must always request a copy of the First Occupancy License before signing a private purchase house contract in the case of being the first occupant. This is to ensure that everything is in order and your will not have problems after the purchasing of the property.

Information given is offered for informational purposes, excluding the company and the author from all responsibility, and does not constitute an official publication nor will it be legally binding. We always recommend checking with your lawyer or adviser.